If you are a Joomla user or developer, chances are you know the name NoNumber for their incredible collection of Joomla extensions.

NoNumber is a company that creates and offers an ever-expanding and improving range of the best Joomla extensions, that are generally focused on extending Joomla's functionality and making repetitive tasks easier and faster.

I am personally a big fan of Advanced Module Manager, which provides you a sovereignty to publish Joomla modules anywhere in your Joomla website. Do you know whose genius head came with the idea of this revolutionary extension? Let me introduce him, he is Peter Van Westen.

The passion of Peter had a kickstart at his six to be a pastry chef. But the accomplishment of his dream to be a pastry chef at his 20, leads him to move forward to do something great. One day Peter got an opportunity to make a website of a church. Fortunately, he built the website on Joomla successfully. And the love for Joomla! started to begin.

Peter van Westen has been working with Joomla for several years now with his one-man company Number!, made some wonderful and award winning Joomla extension like like Advanced Module Manager, Articles Anywhere, Tabber, Slider, Sourcerer. We had a chance to get in touch of with Peter Van Westen and asked the following questions.

I am Peter Van Westen. Born in 1979 in the summer. I think it rained. Stuff happened for 23 long years. Then I met my later-to-be wife. And then life started.

I got married. Got a daughter. And since then life is pretty much complete and great!

Going back to the parts I skipped over:

I wanted to become a pastry chef from the young age of six. My whole education was pretty muchinlined with that. So at the age of 20 I was finished with school/college and got my first job as a pastry chef. Ok, so that’s mission accomplished, what now? Do this the rest of my life I guess…

This job didn’t really deliver what I had expected of it and it quickly became boring.

So, 22 and without a job, I thought: if not pastry cheffing, then something with computers.

After a failed attempt at network administration, I learned I really liked web development. After having learned the basics and made my first couple of websites, I started attending a multimedia course (never finished it). Got a job in web development (using ColdFusion… argh!). And messed around with Joomla in my spare time.

Battle Between CMS(Joomla vs WordPress)

I had to make a website for my church back in 2005. I had taught myself enough HTML and CSS to get around but had not done much with PHP at all. But I needed to create a website with a login part and the ability to create pages. So I decided to learn PHP and how to code these things.

In my hunt on Google for information on PHP and creating logins and databases, I came across something called CMS’s. These things already did what I needed, so great!

I tried a few out but couldn’t wrap my brain around most of them. But I did understand and liked the approach of Mambo. I had most if not all of the features I was looking for. And I could imagine what I would have to do to get my site working with it.

I think I was halfway with the site when Mambo split into Joomla. So I simply moved along with Joomla.

After hacking Joomla into shape to do what I wanted, the site was done. Then the first update came along and BAM, all my hacks were gone!.

So I quickly learned not to hack Joomla but to solve stuff using plugins. And that’s where my journey into Joomla extension development began.

I have had to work with WordPress a few times. In the past years, I have also made a few attempts to see if I could create my extensions for WordPress. But it doesn’t make me happy to be digging around in the WordPress code. For a lot of people and a lot of websites, WordPress is the right fit. But it’s not for me right now.

Scratch Your Own Itch

Creating stuff to help people, not to make money.

Nearly all ideas have come through stuff I needed for websites I was creating at the time. These were either functionalities that were missing or stuff I thought could be done a lot easier/faster.

For instance, I needed to have a module show up on all pages except a certain menu item. That wasn’t possible yet in Joomla in 2009. So I created an extension that later grew out to become Advanced Module Manager.

I needed to place some custom PHP in my articles. So I created AnyTags! in 2007 which later became Sourcerer. So, the most of the extensions were born through a personal need. Other people seemed to also have these needs and liked my solutions for them.

That has been and still is an amazing experience.

Just Do It, Over thinking Kills

There is no philosophy behind the name NoNumber. I started creating Joomla extensions for my own use. When I had 4 of these I decided to just make them available online. I didn’t think it was important to attach my name to these, so I was looking for some anonymous name for the website. I liked the ‘No Name’ brand, but the noname.nl was already taken. So the next choice was nonumber.nl. That was the whole thought process. Not very glamorous! I also had no plans or ambitions at that stage to make these Joomla extensions my hobby, let alone my business. So I didn’t think about claiming the .com domain or get the @NoNumber twitter handle. So now I have @NoNumber_nl.

I am a CPE-developer. I Copy, Paste, Edit.

So, I usually start by taking an extension that sort of does what I want. Either in functionality or approach to a solution. I then start changing it to what I want.

In about 100% of the cases, I pretty much rewrite every line of code or simply start from scratch as soon as I know where I am going.

I work on a Windows 8 laptop. I use PhpStorm for development. For simple file changes (outside of projects) I often use Notepad++. I have a lot of custom PHP scripts I run to copy files around and create the extension zips. I also use WinMerge in this process.

I don’t know if I am very effective in that. You’d have to ask the users :)

When I like a request and think it is in line with the concept/vision behind the extension, I usually add it to the extension the moment the request comes in. I then send the user a version to test out. Usually within the hour.

When multiple users have the same question, it usually means I should either change something in the extension to make it clearer or change my documentation.

Software You can’t live without?

I can’t live without PhraseExpress. I use PhraseExpress to place predefined texts via keyboard shortcuts. I use this in coding, for email signatures, for complete answers to support the request. It saves me a lot of typings. The only bad thing about it is the terrible support on it. But I haven’t found a decent alternative for it yet. I also hate answering support or emails from my mobile, because I don’t have the ability for these shortcuts. 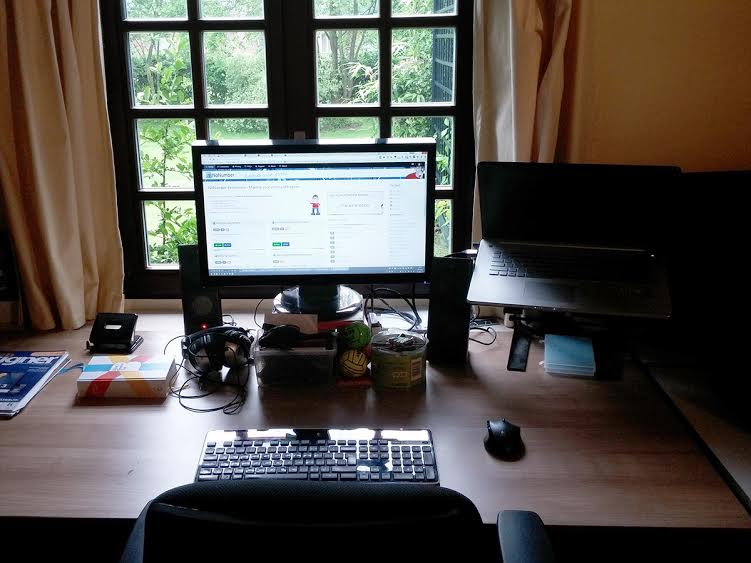 I have a Win 7 laptop. It is a 17” Asus N750J. I have a 21” external monitor and that’s about it. I often work from my laptop alone (like when in bed!), so I like having a big screen laptop. When working from my desk, I only use the external monitor. I can’t seem to be able to work with 2 screens. I hear some developers work with 6 monitors. I just use one.

managing time for friends and family

I don’t. I have a wife for that :) She is usually the one that makes sure we see our family regularly. If I wasn’t married I don’t think I would see much of the outside world. Making time for my wife and daughter is no issue. I love working from home and being able to drop everything in the middle of the day to do stuff with them, whenever I want.

What do you do for your refreshment?

I am blessed to have a beautiful house with a large garden. Now the sun is shining again, I often get into the garden and do stuff, like mowing the lawn or pruning trees.

Your favorite books, music, and sports?

I don’t read books very often. I should be reading my Bible a lot more than I do. But I don’t like reading much at all. I do like music a lot. Currently, I mainly listen to instrumental post-rock, like Mogwai, Glories and Astralia. I used to listen to prog-rock a lot, but not so much nowadays.

Sports? That’s that thing where you have to move around and stuff, right? Nope, don’t do any and definitely don’t watch any.

Wash it, don’t scratch it.

What are your most productive working hours?

Between 1:00 AM and 4:00 AM. But my wife is not very happy when I work at night and get my whole day-night routine mixed

Any advice for newbies?

Make something you think you need first. Extensions (but also other software) that aren't actively used by the developers is usually not too good and lack passion and commitment.

Fill in the gap: 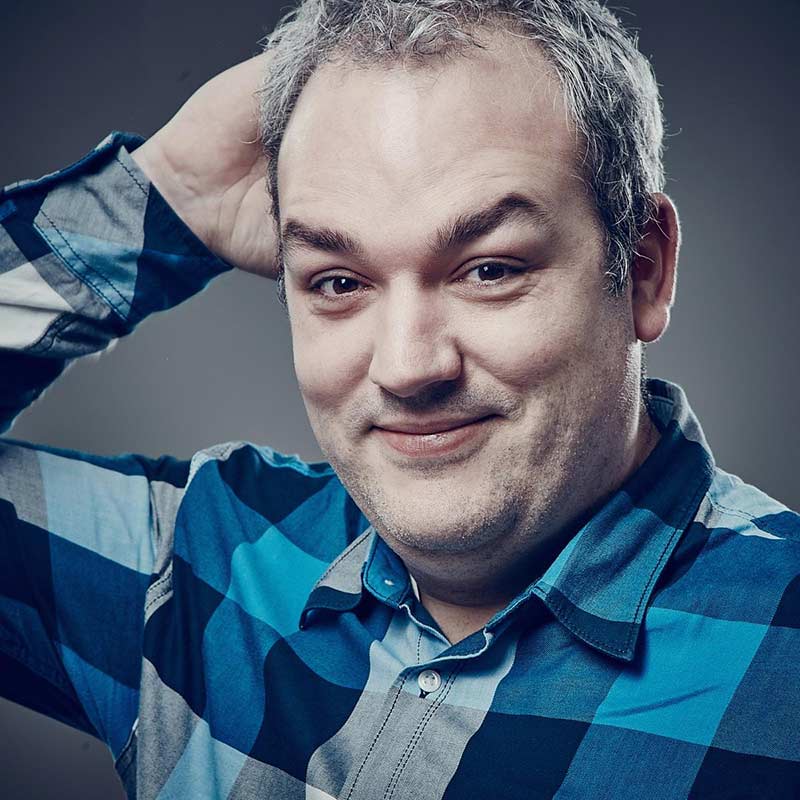 Your Turn: Ask Peter Anything

I have asked all the questions to add a fuel of inspiration in your entrepreneurial journey. Now it’s your turn. Peter has generously agreed to your question in the comments of this interview.

Post your questions for Peter in the comments below.

There are no comments posted here yet